She is highly regarded as a specialist in Animated Film Production. Belli has over twenty-five years of experience in Animation Production Management. She workes for 3 years (2006-2008) in the key role of Unit Production Manager for the film "Planet 51" at Ilion Animation Studios in Madrid, Spain. She has also been the Production Manager in Zinkia Entertainment, working in the first season (2004-2005) and fourth season (2016 - 2017) of "Pocoyo", the most successful Children’s TV Series from Spain. In 2009 she has the great opportunity to gather important experience working “over-seas” for the Oscar-winning company Animal Logic in Sydney, Australia. She works on the CGI Film "Legend of the Guardians: The Owls of Ga'Hoole". From 2011 to date, she works as a production management consultant helping and developing animation projects for different companies. Besides, she has a great foundation in traditional and CGI production methods having worked with: Vodka Talent, Bren Entertainment, Cartoon Network, Neptuno Films, D'ocon Films and, in Hong Kong, for Full Action Limited, among others. She is currently co-founder, consultant and teacher at Mr. Cohl, developing different animation projects.

Producer and founder of Walking The Dog, production company based in the centre of Brussels and specialized in animation feature films. He founded Walking the Dog in 1999 together with Anton Roebben. After their successful career in the companies Little Big One and Trix they decided to set up their own company to concentrate more on the international artistically animated projects. Its portfolio covers a wide range of European co-productions, internationally awarded, such as as Jack and the Cuckoo-Clock Heart, Ari Folman's The Congress, Pinocchio, A Monster in Paris, The Secret of Kells or The Triplettes de Belleville. In 2014 he got the CARTOON Tribute Award as Best Animation Producer of Europe.

Movistar+ Spain Head of the Acquisitions and Programming of Short Films as well as of the selection and development of projects to be produced. She has been member of the jury for international film festivals such as Buenos Aires Independent Film Festival (Argentina), Río de Janeiro Film Festival (Brazil) and Tampere Film Festival (Finland). She has also given lectures and participated in round tables in festivals as Cannes (France), Clermont Ferrand (France), Ludwigsburg (Germany), Toronto (Canada), Tokyo International Anime Festival (Japan), and Museo Nacional Centro de Arte Reina Sofía (Spain), among others. Focused on African Cinema, she has organized screenings for Granada and Barcelona Film Festivals, the Contemporary Art Centre La Casa Encendida, Mujeres por África Foundation (Madrid) and Casa África (Las Palmas de Gran Canaria). She wrote the book Cinematografías de África. Un encuentro con sus protagonistas in 2010, published by Casa África.

Creator and Director of the award winning pre-school animation TV show Pocoyó. His international success has been recognized with a long list of awards: Annecy best TV series and BAFTA Best Pre-school Series, among others. In 2009 he founded El Señor Studio, along with his sister Beatriz. Doomed is the El Señor Studio´s first own project and it has been awarded in 7 festivals including Best Comedy Fernand Raynaud (Clermont Ferrand, 2012). Nefertiti’s Hand is his latest short film, which has been nominated for the 2013 Goya Awards and won the Silver Award at Taipei International Digital Contest Awards, in fact, it continues collecting successes. He is currently working on the development of projects for Disney EMEA and has recently finished the production of a pilot for other production company; meanwhile he works on internal projects and gives lectures.

Audiovisual Producer. Since 2001 has produced eight feature films for the international market, five of them in animation, and has won four Goya awards in the best animation feature category. In 1999 joins Dygra Films as executive producer in the films The living forest (first CGI animation film in Europe) and Midsummer Dream. In 2005 he joins Zinkia Entertainment as head of development and distribution with the series Pocoyó. In 2007 he creates Perro Verde Films and produced five films among them The Missing Lynx presented by Antonio Banderas and the awarded Wrinkles based in the comic book by Paco Roca and directed by Ignacio Ferreras. In 2010 he launched the App Contoplanet, in 2013 he launches the 3D documentary film Bullrunning in Pamplona and joins Noise Box Entertainment as Executive Producer in the animation series Planet-Play. Since April 2014 he is executive producer in Dragoia Media. He is Secretary of the board in CARTOON, member of the board in the Spanish Film Academy, FAPAE and DIBOOS, he is also member of the European Film Academy, The Spanish TV Academy, visiting professor at the Jilin Animation Center in China and digital production teacher at the U-TAD University in Madrid. He has evaluated development, training, distribution and pilot programmes for the MEDIA Programme, speaker in 20 countries. In 1996 got a European scholarships by the MPAA at UIP, in 1997 it was first Spaniard selected by the Nipkow Programme in Berlin, in 2000 selected by the EFA new talent programme in Iceland, in 2007 selected as one of 60 personalities of the Cannes Film Festival by Variety and in 2008 selected producer in the move by EFP. In 2012 got the CARTOON Tribute as best animation producer of Europe. 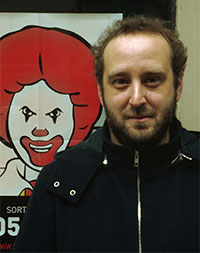 He founds in 1990 PPM Multimedia, where he worked for ten years on international distribution, on co-production´s financing, and executive production of some animated series. He has been executive producer of seven feature films with FILMAX ANIMATION and he currently runs MEDIA TRAINING & CONSULTING, a company dedicated to the training and consultancy of the audiovisual and film industry and also digital content. Besides, he collaborates as consultant for ICEX and he´s expert for the European Union´s Media Creative program.

Silly Walks is a young 2D animation studio based in Valencia and composed by Josep Banyo (Animation), Martín Martínez (Artistic Director), Javier Sánchez (Storyboard and character design) and Alberto Gil (Generalist). All of them have studied Fine Arts at the Polytechnic University of Valencia (UPV). And they defined themselves as a multidisciplinary study. The development of their company is currently linked to Javier Giménez (BraveZebra) under the umbrella of the startup Wild Frame, on an alliance between animation and video games. Currently they are working for big ones like Nickelodeon as well as developing their own projects.